This is Not My Allah, A talk with Rabia Kazan 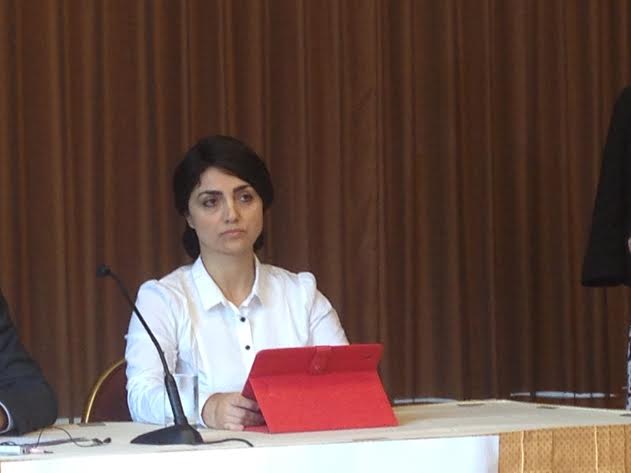 An activist in exile called for Muslims around the world to reject violence, and reinterpret Islam on Wednesday in a Hilton Times Square conference room. Turkish Activist and journalist Rabia Kazan spoke on the issue of many terrorist organizations inciting violence in the name of Allah and the need to reeducate Muslims.

“I’m calling for the secular interpretation of Islam,” said Kazan. “Silence of Muslims fits radical Islam,” she went on to say.

Kazan’s plan to reinterpret Islam has four calls to action: that Imams preach tolerance, that educators teach children of the interlocking relationship of Islam, Christianity and Judaism.  That families, especially mothers teach their children to reject the atrocities done in the name of Allah. And finally that Muslims share their stories to inform the world.

In her new book This is not my Allah she brings many issues of Islam to light including temporary marriage, which is a form of prostitution, that exploits women and is legal under Sharia Law (a moral code for Islam with legal and political implications.) Sharia Law legalizes and promotes violence as a scriptural teaching. She also spoke of her experiences in exile from her home country Turkey.

Kazan’s talk comes at a time when terrorist groups like ISIS/ISIL are running rampant in Syria and Iraq, and inciting televised acts of violence like the beheading of several Western journalist. Kazan says that 93 percent of Muslims believe in Islam as a religion of peace. It’s the 7 percent perpetrating terrorist acts of violence.

Alain Wagner President of the International Civil Liberty Alliance, a Sweden based organization that concerns itself with human rights, also spoke at the event.

“Our governments are deliberately turning their heads to the root of this issue.” Which according to Wagner is Sharia Law.

“Education process is the core issue. Imagine a child who learns you have a right to beat women. When is an adult it will be much easier for him to kill someone,” said Wagner.

The pair insist that is it only a small number of Muslims that adhere to this radicalism. Kazan aims to remove the stigma attached to Islam. In essence the campaign is to rebrand Islam for peace. They also aim to get rid of the fear that terrorist organizations induce.

“I am tired of radicals killing me bit by bit through the fear,” said Kazan.

She herself has been a victim of radical Islamist. In 2011 Kazan removed her veil and received death threats. Since then she has lived in fear and has had to change here name and location several times to avoid those that sought her life. But she insist:

“A lot of women are inspired by what I did. By taking the veil off.”

“It would be impossible to do this talk in turkey,” she said.

Her mission to reinterpret her religion has not been fully realized. But perhaps her campaign will inspire Muslims to reject violence done in the name of Allah.

“ If every Muslim would should shout death to ISIS we would already be on our way to redemption.”